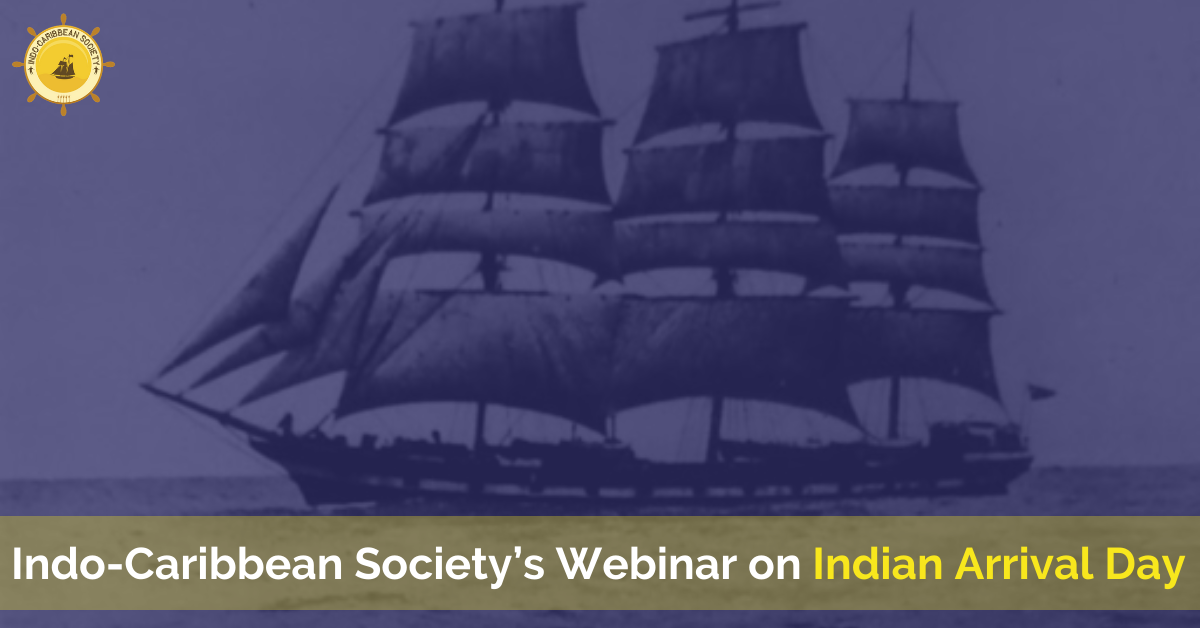 The Indo-Caribbean Society hosted a webinar on 4th May 2021. The webinar’s theme was “Commemoration of the 183rd Anniversary of the Arrival of East Indians to the Shores of the then British Guiana.” The webinar included speeches delivered by experts on Indian indentureship in the Caribbean region and Guyana, more specifically.

According to a report published by the Indian Ministry of External Affairs, over six hundred thousand people live in Guyana who are Non-Residential Indians/ Persons of Indian Origin/ Overseas Citizens of India.

During the course of 1838 to 1917, almost half a million people were brought to the Caribbean region from then British India. The Indians were brought into the area as indentured laborers to work in the sugar plantations. This was right after slavery was abolished.

The first couple of ships carrying indentured laborers from India arrived in the then British Guiana on 5th May 1838. This day is celebrated in Guyana as Indian Arrival Day. The descendants of these people make up 44 percent of Guyana’s present population.

The webinar began with an introduction to the Indo-Caribbean Society (ICS) delivered by Ms. Mary Josephine Judy. Mr. Praem Narine Rambharak moderated the webinar. He is an entrepreneur, social worker, and a member of GIAA (Guyanese of Indian Ancestry Association) and ICS.

The first speaker Dr. Seeta Terry Roath, started her presentation with a favorite poem of hers on the roots of people. She was followed by Ms. Vedha Sukdeo, who recited a beautiful poem titled, “From the unknown to our very own.”

His speech was followed by Dr. Maurits S. Hassankhan’s. He is a Historian and a Researcher on Indentured Labour, Migration, and Diaspora at Anton de Kom University, Suriname. He spoke about the linkages between Suriname and Guyana and about the relationship between the Hindustanis in Suriname and the Indo-Guyanese of Guyana. He also shared his views on Suriname-Guyana relations, indentured labor migration, and the 1870 emigration treaty.

Dr. Radica Mahase followed Dr. Maurits with her speech on the folk tradition of Indian laborers. She is a Historian and Senior Lecturer at The College of Science, Technology and Applied Arts of Trinidad and Tabago (COSTAATT). She referenced various folk songs written to visualize and pass on the woes of the indentured laborers in Guyana.

She was followed by Dr. Lomarsh Roopnarine and Dr. Vishnu Bisram. Dr. Lomarsh Roopnarine is an Author & Professor of Latin American and Caribbean History at Jackson State University. He spoke in specific about indentured labor and the term coolie. Dr. Vishnu Bisram, a researcher of the Indian Diaspora, delivered a speech on culture retention in Guyana and how Indian culture was introduced in Guyana by the indentured laborers.

The webinar came to an end with a thank you note delivered by Dr. Seeta Terry Roath thanking all the speakers, the ICS team, the moderator, and the other participants for making this webinar possible.