Webinar on the Investment Opportunities in Trinidad and Tobago 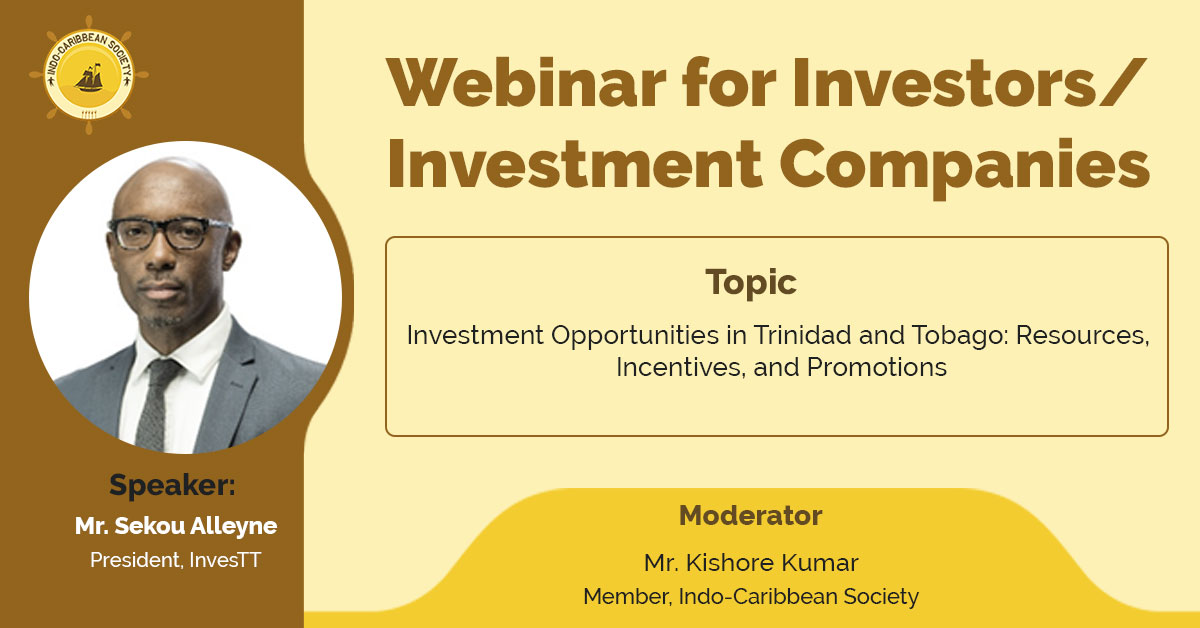 On 29th October 2021, the Indo-Caribbean Society hosted a webinar on the investment opportunities that Trinidad and Tobago offers. The webinar’s keynote speaker was Mr. Sekou Alleyne, the president of InvesTT. Mr. Syam Kumar, CEO of Texila American University, addressed the webinar while Mr. Kishore Kumar moderated it.

In this webinar, Mr. Sekou speaks in detail about all the opportunities in Trinidad and Tobago. Below is a gist of what he covered in the webinar.

Trinidad and Tobago is a Caribbean Island nation known for its fossil fuel. It has two main islands, Trinidad and Tobago, as well as a list of small islands. Trinidad and Tobago has the third highest in the Americas when it comes to the per capita GDP. It is only next to the USA and Canada. The nation’s economy is highly industrial, with a focus on petroleum and petrochemicals.

Besides oil and gas, the nation is a leading exporter of methanol, ammonia, and urea. Trinidad and Tobago has been welcoming foreign investment for more than a century. Also, the country has the kind of economic stability and regional positioning necessary to support industrial and other investments.

The nation’s capital, Port of Spain, shares the time zone with the eastern seaboard of the US for half a year and is just an hour off for the other half. This is an attractive advantage for US companies looking to invest. Also, English is the primary language of communication, and there is a long history of cultural affinity to North America in Trinidad and Tobago.

The exchange rate, a managed float, is also favorable for investors because of its stability. The country is also a part of the Caribbean Community CARICOM. This membership allowed the nation to forge trade agreements with the US, Canada, the EU, Cuba, Venezuela, Colombia, Costa Rica, the Dominican Republic, etc. What this provides to investors is a bigger and better market reach.

The country also serves as a platform for service providers with markets in the Western Hemisphere as well as the European Union. In addition, the country’s proximity to the US and low energy cost make it an attractive location for investment.

The nation also has diplomatic ties and investment protection treaties with India. The treaty protects investments from double taxation.

The country has robust energy, manufacturing, and logistics sectors, and companies can leverage these advantages to their benefit. In addition, the government is planning on implementing special economic zone incentives to encourage investments. The incentives under the Fiscal Incentives Act will exempt the companies from customs duties on the construction of approved projects and value-added tax.