Did Mankind Betray Humanity in the Battle Against Novel Coronavirus? 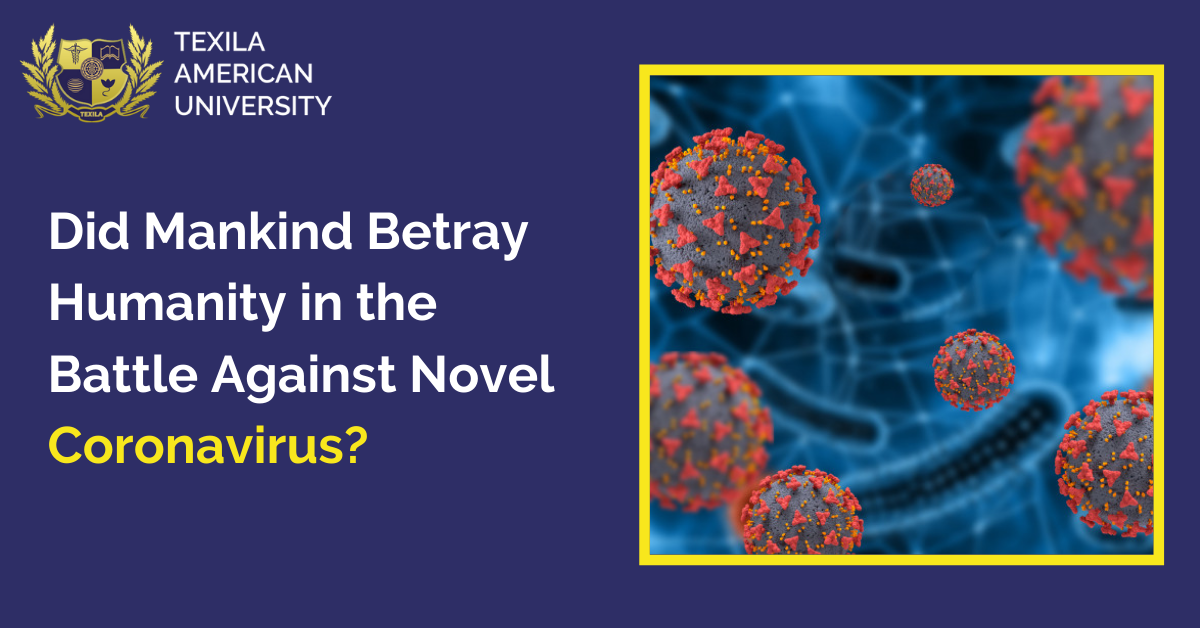 Within a span of less than 12 months, nearly two million precious human lives were lost, and over 77 million became the victims of the disease whose vital antecedents are yet to be confidently established. Coronavirus is a family of viruses that target mammalian respiratory systems. Among humans, it had been isolated earlier on two occasions: first as a severe acute respiratory syndrome (SARS), and then as a Middle East respiratory syndrome (MERS). These, by and large, remained geographically confined to mainland China-Hong Kong (2002) and Saudi Arabia (2012), respectively. The current variety, aptly named the Novel Coronavirus, carries a much higher level of virulence than in the past. It was first reported from Wuhan, China, in December 2019. Based on the severity of symptoms, this is identified as SARS-CoV-2. and coronavirus disease 2019 as COVID-19.

It appeared that the virus could cause mild flu-like symptoms, as well as more severe disease, with symptoms that may be alone or combination of dry cough, sore throat, shortness of breath or difficulty in breathing, fatigue, headache, congestion or running nose, fever with or without chills, muscular pain, giddiness, vomiting, diarrhea or a recent loss of taste or smell. According to a report published in The Lancet, one of the oldest and most respected medical journals, around 81% of people with COVID-19 have mild symptoms and do not require hospitalization. The rest appear to progress to more severe diseases, including pneumonia, respiratory failure, and, in some cases, death. The question that escalated grave concern universally is whether WHO showed hesitancy in declaring COVID-19 a pandemic. According to many, it was a critical error of judgment. An epidemic becomes a pandemic when there is a wide geographical distribution of the disease. This seems to have already happened several weeks before 11th March 2020, when WHO made its move. The delay in calling the COVID-19 outbreak a pandemic was inexplicable. But does the terminology have any practical importance? As citizens of this world, it is extremely important to comprehend that this word is a trigger that has the power of bringing the entire combative machinery of all nations at a synchronous wave-length. In each country, a united front is created comprising politicians, administrators, municipalities, law enforcement agencies, and leading from the front, as well as establishing back-up support, are the healthcare workers of all ranks and designations. It may not be wrong to say that the delayed communication of how sinister COVID-19 could be, created a false sense of security among the general public; and skepticism about the honesty, as well as competence of those sharing anxious thoughts. Perhaps it dawned too late on the average man-in-the-street that unique to pandemics is the need for vast international coordination and collaboration within national boundaries as also providing appropriate (not just funds) aid to those in need, initiating research on treatment protocols, medications, and vaccines; generating or procuring protection gears, as well as critical care equipment, garnering extra manpower, and adjusting available resources; implement travel restrictions without hampering movement of human resources; and mandatory inventory. Ensure adherence to International Health Regulations. It is also expected to provide the international health community with a common global term to enlist the cooperation, as well as compliance of the general public, and convey the necessary sense of urgency to decision-makers. Needless to say, mentally preparing a kaleidoscopic range of communities requires strategy, accessibility, and patience. Needless to conclude that a general feeling that WHO had “let us down” cannot be summarily rejected.

Is there any other mechanism by which mankind betrayed humanity in the present scenario? At the outset, we need to believe that all over the world, doctors, nurses, paramedical personnel, laboratories, other technical staff, and all others were very truthfully portrayed as COVID warriors, created an unprecedented bond to rise to the occasion, unruffled by their personal risks or inconveniences. They arrived at a broad-based consensus based on available indications that the main way the virus spreads is by respiratory droplets among people who are in close contact with each other when the virus gets into their mouth, nose or eyes, which is more likely to happen when people are in the proximity of an infected person. Forceful talking, coughing, sneezing, singing, or even heavy breathing can release a virus load. It was imperative that hands which are often used to cover the mouth during a bout of cough, would be able to easily get smeared with virus-rich droplets and transfer to any surface they touch, particularly to another individual during an innocent handshake, use of a public phone, washroom taps, door handles or even electrical switchboards. Uncontrollable viral propagation naturally would be expected in ill-ventilated crowded places. Merely touching eyes, noses or mouths with contaminated hands would spell disaster for individuals, as well as communities at large.

Based on these observations, WHO, the Centres for Disease Control or equivalent, in various countries, the lawmakers and the wellness maintenance personnel went and societal think-tanks undertook long brainstorming sessions to give us the most relevant “vaccine” of prophylactic guidelines, way before actual vaccine research could be launched. This preemptive advisory comprised a triad of very easy-to-observe steps in respect of face, hands, and space.

The seemingly endless saga of 2020’s unprecedented human tragedy began because we, the people of the world simply refused to follow these simple precautions. Except under fear of punitive action, the pathetically callous and irresponsible response of mankind, eventually betrayed the human race living spread over earth’s seven diverse continents. Masks or other face covers were worn without covering the nose, or worse, merely hanging from the neck. The frequency of adjusting masks with hands and touching eyes, nose, or mouth and other surfaces was done with every eyelid-bat, and such contaminated hands were seldom washed or sanitized. The average individual was seen to finish washing hands within bare five seconds instead of the recommended twenty! Hand sanitizers were used more like perfume samplers than effective cleansers.

Countries had to seek police assistance for maintaining social distance. Why did such lapses happen? Every other person considered himself immune to any disease; and thought nothing about putting others at risk. All of a sudden, personal freedom became a big deal for some people who wanted to deliberately violate the smart advisory. And some of the worst offenders were many national leaders and other public idols like sportspersons or cinema stars, who led from the front to set the example of how they dared to violate the rules. We have seen many public personalities. as well as media persons, test positive, but no one seemed to realize that when these people removed their masks and spoke before a battery of microphones, they were creating an unhindered passage for the bug to travel to and fro. Quarantine rules have been indiscriminately violated.

The newspapers and TV channels are buzzing with intimidating data about infections, recoveries, and deaths. Countries have been pushed to the brink in meeting the demand for critical care beds equipped with ventilators. Internationally there is a lot of discussion about the volume of testing done to identify COVID-19 positive cases. Even here, the human negligence factor plays a big role. People likely affected by the disease either have limited access to affordable testing facilities or are confident of automatic recovery and consider testing as superfluous or else fear the social stigma if found testing positive. It is very worrisome that the routine activities of many hospitals have been curtailed under compulsion to provide room for COVID cases.

Curiously, the spectrum of COVID-19 has not been uniform globally. There are countries that have been able to limit deaths to less than one per million population, whereas others have registered mortality as high as 1500 or more for every million.

Just as we thought that novel coronavirus infections and deaths could be receding and taking solace at the beginning of vaccine availability, newer strains of the virus, in a much more sinister avatar, have surfaced, creating a new bout of headache for healthcare authorities. The factual scenario on development, potency, availability, and priority with respect to vaccines against SARS-CoV 2 is still somewhat hazy, and the perception at all levels is speculative. That a few of the earliest batch of vaccine recipients had serious allergic reactions is a matter of concern. And the coincidence of the country of first vaccine use also reporting the first cases of a deadlier strain, makes an ominous coincidence.

As members of human society, can we now try to make amends and behave in a more responsible manner? Can we now ensure that the vulnerability of our near and dear ones is understood in all seriousness? Can we take a pledge to fastidiously implement all prescribed preventive measures?

Doctors are realigning more on ways and means to give relief to the patients from various symptoms only, as much as possible. The public at large is now well aware that in COVID-19, there is a drop in Oxygen saturation in a patient, and the sudden and precipitous drop of Oxygen Concentration in the blood, creating multiple organ failures, which can result in death. Almost every healthcare facility started to remain focused on the oxygen concentration level and, if required, provide supplementary oxygen. Now households are more knowledgeable and in a position to keep track of oxygen saturation at home using portable pulse oxymeters. But with this knowledge has cropped up the tendency of setting up quick-fix solutions.

Over-enthusiastic though well-intended steps can spell danger. A typical example is an idea of keeping filled oxygen cylinders at home, handy, so that, as and when required, any patient can be administered oxygen, even if there is a scarcity of bed in the hospital. Some residential complexes have started taking the lead in stocking their own without realizing the hazards. It is highly dangerous to store or handle high pressure-filled medical oxygen cylinders. There are very strict laws enforced World-over to ensure that such cylinders are stored safely and handled by only and only trained and authorized personnel. Nevertheless, such societies would do well to rope-in trained healthcare personnel available on call at short notice.

The best practice in this regard should be to use a bed-side oxygen concentrator, which runs on power, and can easily be managed by common citizens. In case of power failure, either a standby aluminium cylinder should be kept, or else a portable Oxygen Concentrator, which operates on batteries, can be used. However, these propositions are advantageous for convenience but are quite capital intensive. The operating cost is, however, quite low. But all these actions contribute to finding ways and means to decongest the hospitals and let normalcy return.

It is now well known that enhanced immunity can lessen the impact of viral disease. Residential clusters, without compromising the prescribed safety measures, can create awareness about diet, exercise, and ancillary factors, especially for senior citizens and those who are compromised by other co-morbidities such as diabetes, renal failure, and heart disease. And everyone must be initiated to the practice of yoga through simple exercises.

There are people who have put their own lives in jeopardy due to sheer carelessness, and there are others whose negligent attitude has led to others getting infected, at times with fatal outcomes. Are these not fit to be labeled as either attempted suicide or culpable homicide? We need to ponder.

Any isolated activity, within a group, state, country, or group of countries, etc. won’t work. The efforts should be universal, people to people, which will bring about a post-pandemic World to make it turn to be “Vasudevam Kutambakam.” These are the objectives of Governance, as prescribed in the Vedas of Ancient India.